Anyone can write a book. Just tell yourself a story a pebble at a time.  Stephen Mack Jones 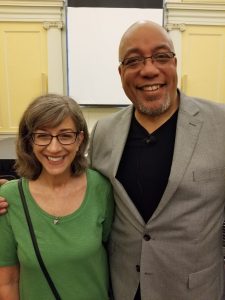 In most circles of friends there’s that One. You know, the one who tells great stories–and acts out all the parts. That friend who is self-effacing, no matter how successful they might be. The one who has a strong moral compass, yet never acts holier-than-thou. The one who is often the butt of the jokes they tell.

The Grand Rapids Public Library recently hosted An Evening with Stephen Mack Jones as part of their summer GR Reads program. Jones is the author of August Snow a crime novel that pairs a rollicking whodunit with insightful social commentary all set against the backdrop of Detroit. (Read my review of the novel here.) And if I had to guess, Jones is that One for his family and friends.

Dressed casually in jeans, a black tee, and sport coat, Jones began the evening by talking about the process of writing the novel. Joking that after he retired (Jones was a copywriter by trade) there was never anything new on Netflix, he set about to tell himself a good story. While mowing the grass one day the words “August Snow” popped into his mind, but it meant little to him at that moment. When he later looked back at some ideas he had jotted down for a story, he realized that August Snow was the hero’s name. Jones said as he wrote, the story moved him, making him laugh … and cry.

Readers of August Snow know August holds dear the memory of his parents and feels their influence daily. Jones said that during an early interview when asked who the story is about, it came to him that August Snow is the story of his father, the hero “that makes the hero yet never asks for any glory.”

After Jones told the story of writing the novel, he took just as long to answer audience questions. This is one author who was not stingy with his time, one who thanked the readers sitting in the audience again and again as being the source of the book’s success. Of course he was asked about a second novel (Lives Laid Away set to be released in January 2019), and of course he was asked about a film version of the novel (and the answer is probably–the novel was recently optioned).