A born and raised Midwesterner, I am drawn to novels set in my part of the world. Ohio. Michigan. Wisconsin. Minnesota. There is something 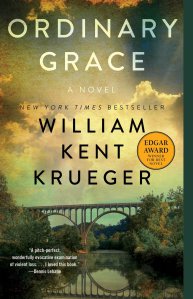 magical about stepping into a world you know, of finding a story that captures the ethos of a place you love. When I turned to the blurb on William Kent Krueger’s novel Ordinary Grace, and read “Minnesota” and “1961” I knew it was a must-read.

The narrator of the story is thirteen-year-old Frank Drum, a pretty typical “PK” as we used to call them. Preacher’s Kid. He balked at authority, pushed limits, and tried to circumvent just about any punishment his parents meted out. His father, Pastor Nathan Drum, is a WWII vet who traded studying law for the ministry when he returned to the States. Frank’s mother Ruth was less than thrilled with the prospect of being a pastor’s wife and she shares Frank’s rebellious spirit. She smokes … on the porch, in clear view of everyone. She drinks martinis. And she’s not so sure about this God-thing her husband is all about. Ariel, Frank’s older sister, is an accomplished pianist and composer with great promise who is about to set off to Julliard.  Frank’s nine-year-old brother Jake is a quiet boy, in part because he lives with a stutter that makes speaking difficult.

The story begins with the death of one of Frank’s classmates, Bobby Cole. Daydreaming as he sat on the trestle over the Minnesota river, he was killed when he didn’t hear an oncoming train. Police officer Doyle suspects his death was not an accident–that maybe one of the homeless who lived by the river had something to do with Bobby’s death. Or maybe it was the Indian Warren Redstone, a Native man with a rap sheet. (His charge? Protesting for Indian rights.) His recent reappearance in town (by Doyle’s account anyways) could only mean trouble.

But Bobby’s death was just the beginning of an awful summer of loss. One that would both pull Frank away from his father’s faith and pull him closer. After Bobby’s death, the brothers discover one of those homeless men, dead by the river; Ariel’s mentor and close family friend Emil Brandt tries to commit suicide. And then comes the death that nearly destroys the Drum family.

Although I think it’s evident that Krueger loves us Midwesterners, he doesn’t shy away from uncovering our ugliness. Racial prejudice. Gender stereotypes. Abuse. Alcoholism. But he does so with understanding of our frailty–he looks at us honestly and without condemnation.

Krueger is able to do this, I think, with the cooperation of  Nathan Drum. We are privy to a couple of Nathan’s sermons in Ordinary Grace and we learn that his God is a God of love. A God who promises light over darkness, who gives us humans the grace to “endure our own dark night and rise to the dawning of a new day and rejoice.”  When Nathan learns that a young person in his life is gay, he reassures the young man he is a child of God–loved, not sick; made in God’s image, not a freak. It’s not what you’d expect of a rural pastor in Minnesota at the beginning of the sixties. But sometimes those of us in the Midwest even stereotype ourselves, and I’d venture a guess that Nathan’s view of the world was more common than we assume.

That’s what I love about reading novels written by authors in the Midwest. Our faith, our optimism, our love of family–and hot dish casseroles!–is not mocked or derided. Instead, our spirit is celebrated.