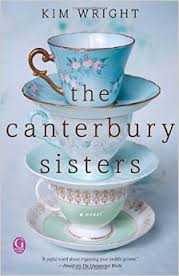 Chick lit for women of a certain age–it’s difficult to come by. Most of the chick lit I’ve read falls into the twenty-something-my-boyfriend-left-me or the twenty-something-I’ll-never-find-Mr.-Right category. And if you’ve read my last post (link) you understand that I’ve been there and done that.

But every once in a while I need that light and breezy read, something to make me smile and believe in falling in love again.

Kim Wright’s Canterbury Sisters was it. Che Milan’s mother passed away after fighting a horrendous battle with cancer. When her ashes are delivered, Che finds this note: “…per our agreement, you must now take me to Canterbury. Do it, Che. Take me there. Even if you’re busy. Especially if you’re busy. It’s never too late for healing.”  Now Che had agreed, in the early stages of her mother’s illness, to make the Canterbury pilgrimage with her. But the end had come too quickly for the two to set out on the trail and receive a blessing for healing in the cathedral.

Spurred by a loss of her own (which is quintessentially chick-lit-ish!) Che throws caution to the wind and almost immediately hops on a plane to England to join a group of women who are just about to embark on the pilgrimage.

Now Che doesn’t particularly relish the intimacy that such a trip implies. She’s a no-nonsense professional, a wine critic whose reviews are both sought after and feared. Heart-to-hearts with a BFF and touchy-feely girl talk just isn’t her thing. But her mom requested it from the grave, and who is she to deny such a demand?

At their initial meeting, the tour leader Tess suggests that maybe the group wants to travel like Chaucer’s pilgrim’s did–each telling their tales “to see who could best articulate the nature of true love”. The women draw cards to determine the order of the stories and as quick as you can say “Once upon a time” they are off and walking the sixty miles to Canterbury.

So we hear each of their stories, from Becca’s adolescent love song to seventy-three-year-old Silvia’s  tale of love (and memory) lost and found. Some of the women have deceived themselves in matters of the heart and others followed their hearts. Some have had to come to terms with their own shortcomings, others the betrayal of their lovers. But the tales, and more importantly the women, are far from what Che expected.

Che also, we suspect, begins to discover that true love is also far from what she expected. And that the healing she was seeking just might have been her own.