We are getting ready to say g 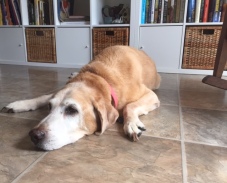 oodbye to this girl. She has been with us for 14 wonderful years, but her body and mind are rapidly failing and we’d like to say goodbye while she can still recognize our touch and our voices as we love her into the next world.

Motoring down a country road on that sunny June Sunday so many years ago—greenhouses and hobby farms on either side of the road–we saw a hand-painted plywood sign by a mailbox: Lab Puppies. Hubby just wanted to “look”, but it was love at first sight and there was no turning back. She chose him, he said. And who was I to argue? The puppies’ momma was young, sociable, and begged to play chase—a great example for her babes of what a dog should be.

There is nothing in the world like the smell of a puppy. (Someone should bottle it, am I right?) And that fat little puppy tummy breathing in out in out. We toyed with the name Penny because this yellow lab had a darker coat that shimmered like a new penny, but settled on Trixie, a name that was spritely and feminine–just like her.  Easy to train and easy to love, she was eager to please. Trix cried every night we crated her for the first month until we thought to tether her to our bed post where she slept like the baby she was.

Of course she could get into mischief. She has probably eaten over 250 dollars cash in her lifetime—both “snacks” snatched from my purse when we had to run out in the evening to some activity or other. After a long day at home, you see, Trixie felt (apparently) we really shouldn’t be leaving again. So once she munched my grocery money and then again money I had collected for a baby shower at work. Both times a dose of hydrogen peroxide brought up most of the money, some of it shredded, of course—but I became quite the expert at slopping off the bills, rinsing them, laying them out on paper towel, and painstakingly matching serial numbers so the bank would cash in at least some of them.

Trixie was born to be a camper. She loved the woods. She loved hiking—the longer the better. She loved the Lake and swimming with her dad. She loved the attention she got whenever one of us waited with her outside of the shower house or camp store. She loved marshmallows–raw, not toasted. Nothing could dampen her enthusiasm for the woods, and, in fact, she was the reason we moved from a tent to a camper—a week of rain, a week of sleeping with a wet dog between our sleeping bags, a week of muddy paws everywhere and hubby relented, agreeing to a pop-up. (Thank you, girl!) Now we had the pull-out and she had the floor. Sadly, she hasn’t gone up north for a few summers. The heat, the confusion (she lost her hearing), the lack of her routine just didn’t sit well. 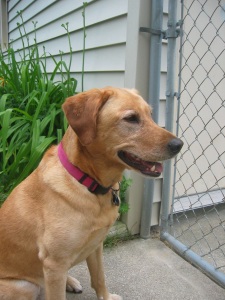 We’ll never see the likes of her again and it seems impossible we’ll soon say good-bye. Our vet has agreed to come to the house when it’s time. I’d like Trix to lie by the lilies that border our garage (the same lilies behind her in this picture) and drift off to sleep peacefully. She loved that flower bed, running headlong through it nearly every time she played catch or chase—leaves shredding, flower stalks bending, clods of dirt flying. I’m pretty convinced she did it just so she could get a rise out of me; what fun it must have been to look over her shoulder and see me running after her (time after time after time) yelling, “Get out of my flowers!”

I’m convinced that if there’s a world after this one, our fur friends will join us. In one of my dreams of heaven,  I come to a grassy hill (the very best kind of hill there is) and start to climb, when over the crest bounds a lab as bright and shiny as a penny. I’d know that crazy lope and those flapping ears anywhere! “Where’ve you been?” she’ll  seem to say, cocking her head to one side. Then we’ll go find some trails to hike or flowers to run through.

And we’ll both be happy again.