Most people assume that as a teacher, I’m the one who instructs. And it’s kind of implicit in the teacher-student relationship, I agree. But as I move into my twenty-third year of teaching (good heavens!), I find that dynamic is often flipped, and it’s my students who share their wisdom with me. 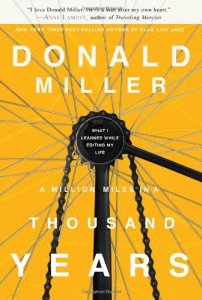 During one of my Advanced Placement students’  Socratic Seminars this year, one of the students, Matt, remarked, “Donald Miller once said your life is a story” (this in a discussion of death and dying) and I was intrigued. I’d never heard of this Donald Miller fellow, and who was he that a sixteen-year-old would quote him?–about ‘story’, no less.

After a quick Google search,  A Million Miles In a Thousand Years  popped up and the subtitle “What I learned while editing my life” spoke to my heart. It didn’t take me past reading the author’s introduction to decide I needed the Kindle edition delivered post haste to my reader

Miller gained some fame after his first book Blue Like Jazz, and there was interest in a film based on the memoir, even though since writing Blue, he was stuck and had no motivation for much of anything but watching TV.  As Miller and the film makers began writing the screen play, they broke it to him not-so-gently: his life was too boring to be a film. While Miller himself wanted his life to be an “easy story …  [he knew that] nobody really remembers easy stories. Characters have to face their greatest fears with courage. That’s what makes a story good.”  Artistic license was necessary to make the memoir appeal to filmgoers who would want that good story—in the same way, Miller himself begins to re-write his own reality to follow more closely “the essence of a story”. Try putting these on your Life’s “To Do” list: reunite with a long-lost father, ask the girl out, hike to Machu Picchu, cycle across country. Life got interesting real fast.

This is a journey that, at its heart, is spiritual—but with a small “s”. While Miller is a Christian, there’s nothing holier-than-thou here, which is refreshing. But what an incredible vision of God he has here:If I have a hope, it’s that God sat over the dark nothing and wrote you and me, specifically, into the story, and put us in with the sunset and the rainstorm as though to say, Enjoy your place in my story, and you can create within it even as I have created you.

While much of the book is focused on the author’s own transformation, he also introduces us to other “characters” he has met who epitomize living a good story. Talk about inspiration, dear reader! My only reservation is that I found myself most moved by the first two or three sections of the book– the ones where Miller confronts that his tendency to let life happen to him; as he checks off his “To Do” list, the narrative becomes a bit less compelling. Overall, I think Miller’s story metaphor will especially resonate with readers, but is a great read for anyone who wants to live more deliberately.

You shared some pretty incredible wisdom, Matt. Thank you.

One thought on “A Million Miles In a Thousand Years (review)”