The Truth According To Us (NetGalley)
Annie Barrows
Random House

The charm of writer Annie Barrow’s Guernsey Literary and Potato Peel Pie Society is legendary, especially in the book club world. How many modern “literary societies”, I wonder, have read the novel since its publication in 2008? I know it had everything I love in a good book: quirky characters, strong women, slow-grown love, and a happy ending. Throw in a little-known setting and tell the story in a series of letters … what’s not to like?

I approached Barrows’ new novel, The Truth According to Us, with some trepidation. First of all, Barrows was the 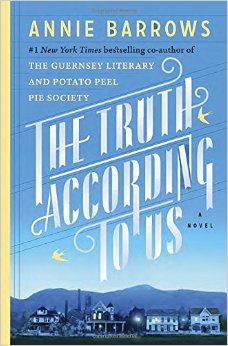 coauthor of Guernsey, so my guard was up. But it turns out, she wrote that first novel with her aunt—or, more accurately, revised it extensively before publication, as her aunt was quite ill and could no longer work on the book. Her aunt, sadly, didn’t live to see the novel published. (Barrows’ is also the author of the popular series for middle readers, Ivy and Bean.)

Let’s just say I wasn’t disappointed with Barrow’s first novel for adults authored on her own.

Layla Beck arrives on the doorstep of the Romeyn family as a boarder; she’s  to  write the history of the small West Virginia town of Macedonia working for the WPA’s Federal Writer’s Project. Unbeknownst to the Romeyn’s, Layla is an imposter of sorts. While she is working for the Depression era social works agency, Layla has really been tossed out of her senator father’s D.C. home for living the life of a socialite, but refusing to marry a befitting (read, “wealthy”) suitor. She needs to make her own way in the cold, cruel world.

Macedonia’s sesquicentennial is approaching and a history is just what is needed to memorialize such a grand affair. The town’s elite (I use the word loosely) want their family trees to be reflected on with proper dignity–it might even be acceptable to stretch the truth a bit.

But most Macedonians don’t put up with fools lightly. And in her white suit and silk dresses, Layla looks just that in the oppressive summer heat. Her landlady Jottie Romeyn is closing in on spinsterhood, raising her brother Felix’s two girls, Bird, 9, and Willa, 12. Felix comes and goes on mysterious business trips, and it is pretty clear the Romeyn’s have seen better days.

It isn’t long before the work Layla so resisted begins to give her a purpose—and her research begins to reveal that the history the city fathers have in mind is often far from the truth.

Layla also discovers that she isn’t the only one pretending to be something she’s not; the Romeyns also have secrets. And it’s twelve-year-old Willa who starts to unravel the mystery of the family’s past, first to feel closer to her father and then to “protect” Felix from (as Willa sees it at least) the wily Miss Beck. But like most histories, the Family Romeyn’s has a dark side.

I was put off, at first, with what seemed an awkward narrative style—one chapter would be written in third person narrator, then the next might be a first person account by one of the characters. I’d sometimes forget who the “I” was. (I did, however, finally settle into the style.) And while I loved Willa, I couldn’t help but see her as some sort of hybrid of Scout Finch and Flavia De Luce–and I couldn’t decide whether or not this was a good call on Barrow’s part, or if I felt like she was a bit heavy-handed with her parallels.

It’s true for so many of us that the story we write is often the story we’d like to tell about ourselves, rather than the truth … but in the end, Layla Beck, the Romeyn’s, and Willa work it all out.

One thought on “The Truth According To Us (review)”