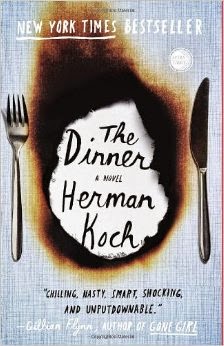 Brothers Serge and Paul Loman meet for dinner with their wives Babette and Claire. You could cut the tension with a knife: Paul resents the choice of an expensive (and pretentious) restaurant and his brother’s celebrity (Serge is running for prime minister); Babette, red-eyed, has obviously been crying and Paul distracted by a message he read on his son’s phone while snooping in the boy’s room. Still, there’s the required small talk about the new Woody Allen movie and summering in France. And then the women excuse themselves after Babette breaks into tears again. And Paul leaves to meet son Michael to return his cellphone.

But before handing over Michael’s phone, Paul pokes around it again. Listens to a voice mail, opens a video–and now we know the that these two upstanding families are shadowed by first one and then another horrific act carried out by their sons. There are dirty secrets all around. “Come!” author Herman Koch seems to say. “Take a peek into the twisted psyche of one character and then another. And another.”

I don’t know whether or not Koch’s novel should be labeled a mystery or a thriller, but it is riveting. While the plots are not similar, the only thing I could compare the book to is Gillian Flynn’s Gone Girl—I read The Dinner in the same frantic way, finishing it in the space of a day. There’s not a single likeable character in the novel, nor anything redeeming about the outcome, but I’m guessing you won’t care. You’ll just want to get to the end.

One thought on “Dirty Secrets :The Dinner (review)”