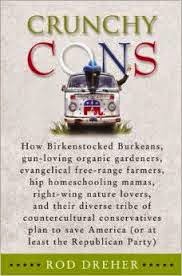 For the past year, I’ve been reading Rod Dreher’s posts on American Conservative. I came to Dreher’s column after I read the account he wrote of his sister’s battle with cancer in The Little Way Of Ruthie Leming which I wrote about on this blog  nearly a year and a half ago. He was honest. He held himself accountable. He put family first. Faith was the center of his life. What was there not to like?

Of course, there was the small fact that he was a conservative. And I don’t really cotton to conservatives. Or was this the bane of life after fifty, I thought? You get old. And stodgy. And, well … conservative. But still I returned to read (sometimes two times a day because Dreher is just that prolific) about Iraq and welfare moms and gay marriage and the Catholic sex abuse scandal and education and Pope Francis and Dante’s Inferno and just about any other contemporary cultural and political issue you could name. (When you read his column, be sure to stop the comments, as well–they’re often every bit as engaging as Dreher.) What else was left, then, but to order his other book, Crunchy Cons, written several years earlier? I was a bit surprised that a hard copy was only available used, but my book (excellent condition! like new!) arrived a week later from a Goodwill store somewhere out East.

Crunchy Cons begins with Dreher’s Crunchy-Con Manifesto, ten tenets for this new breed of conservative. The principals cover materialism, economics, culture, the environment, aesthetics, education, religion, family life and go something like this: “We believe that modern conservatism has become too focused on material conditions, and insufficiently concerned with the character of society. The point of life is not to become a more satisfied shopper.” I found little to disagree with (except the homeschooling emphasis, but that’s just because I’m a tetchy public school teacher, I’m guessing, and I could easily modify the “homeschool” part by substituting “parents’ direction and involvement in all things schooling”) and I’m guessing many of my liberal friends would agree with Dreher’s view of our world. This is the world of reading families, nursing moms, and foodies. Of turning off the TV and church on Sunday and eating organic. My world.

My husband, ever the philosophy student, would point out that this is conservatism in the true sense, with a small “c”–the conservatism that promotes tradition and community and the greater good. Not the Conservatism-with-a-capital-C that plagues informs public discourse today with its emphasis on big business and trickle down and tea parties. And I’d probably reply I don’t care about all that–I just like Dreher’s thoughtful probing of American culture, our shifting values, and his discussion with readers on how we can right the ship.

Good gosh! A conservative? Who knew?