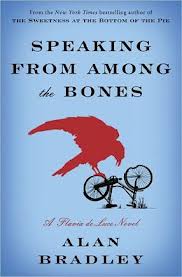 Was sorrow, in the end, a private thing? A closed container? Something that, like a bucket of water, could be borne only on a single pair of shoulders?

The story begins in true Flavia fashion with a twelve-year-old girl who can’t keep her eyes off  a severed head dripping blood–described, of course, in all its gruesome glory. And with that, author Alan Bradley has me hooked, ready for another romp with the sweetheart of Bishop’s Lacey. Except in a typical Bradley “gotcha!”  it’s just a stained glass window in St. Tancred and Flavia is remembering the Second Reading from a month ago. But in just a few turns of the page, there’s a bat, a dead man in the organ loft, blood dripping through the church ceiling, an exhumed saint, poisoning–now that’s more like it.

The bishop has decided to disinter the body of St. Tancred on the occasion of the quincentennial of his death. The digging stops at the discovery of yet another body and rumors that the saint’s crozier was inlaid with diamonds–then it’s a race against time, Flavia, and the evil magistrate Mr. Ridley-Smith. Flavia finds yet another  connection to her mother Harriet when she discovers lonely, simple Jocelyn Ridley-Smith locked in and hidden away on his father’s nearly empty estate. To make matters even worse, Buckshaw is for sale.

I am still sometimes  put off by the arcane references to chemistry. But while Flavia can still wax eloquent about arsenic, for example (“In its arsenious oxide form, the arsenic was soluble in water, but not in alcohol or ether. The cyanide was soluble in alkaline water and dilute hydrochloric acid, but not in alcohol …”), we also get a glimpse of a new Flavia’s world where “everything was topsy-turvey.”. Where laughing with sister Daffy was preferable to kicking her, where she blurts out endearments to Dogger, and is troubled by a lump in her throat and brimming eyes on more than one occasion.

And perhaps most exciting for this reader is that there is sweetness in the bottom of this pie for anyone who loves Flavia and the DeLuce family.

Next up: I am almost done Melanie Benjamin’s historical novel about Anne Morrow Lindbergh, The Aviator’s Wife. It’s been a good read overall, so look for my post soon.