I’ve never read horror –or monster–stories. (Except I do love my Frankenstein!) Most teens go through a scare-the-wits-out-of-me reading phase, but not me. So you wouldn’t think I’d fall for a book about 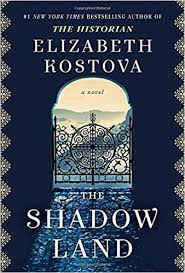 Dracula, but I did. And let’s face it. The Historian got so much buzz when it was published, how could I not? The adventures of Paul and Helen searching Vlad the Impaler’s burial place in Bulgaria and Budapest–the mountains, the monasteries, the countryside–were just as thrilling as the tales of Dracula. The novel was myth layered over history layered over politics and even at 647 pages I didn’t want it to end.

So I was so excited to get an advance digital copy of Elizabeth Kostova’s third novel, The Shadow Land. The publisher’s blurb said only that a young American in Bulgaria is left holding an “ornately carved wooden box” and inside? “… an urn filled with human ashes.” The girl, it seems, mistakenly takes the bag of a handsome gentleman she bumps into in a taxi line. Sounded to me like I might go on another romp to Vlad’s stomping grounds–could this be another (true) vampire story? Because, remember, at the end of The Historian, the narrator gets a small velvet book that isn’t hers …

But no. This is a story about that American, Alexandra Boyd, and her attempts to return those ashes. She’s befriended by taxi driver Bobby Iliev, who drives her from the city of Sofia to a monastery to the mountains to another village … and they’re always just behind (or maybe it’s ahead of) the Man Who Lost His Bag. Kostova alternates several tales: the race to return the ashes, Alexandra’s childhood, Stoyan Lazarov (he of the ashes), and, eventually, Bobby’s background. The only horror in the novel is the horror of Bulgaria’s past as a Soviet bloc country. For my reading taste, it was a patchwork of stories that never quite came together. And, sadly, didn’t hold my interest.

I’ve become quite familiar with the disappointment of reading books that don’t meet my standards for good storytelling. So I think what bothers me the most is this–was my dislike of Shadow Land based on the story itself–or the writing–or the fact that for months I had been anticipating a return to The Historian? It’s happened before. I was captivated by The Thirteenth Tale and then aghast at Bellman & Black. (Maybe “aghast” is a little strong … ) If you read enough, you’ll read plenty of clunkers.

The Shadow Land will be released on Tuesday, April 11, and I’m impatient to read what other reviewers have to say. Who knows? Maybe it’s just me.