The story opens with Samuel Hawley teaching his twelve-year-old daughter Loo how to shoot a rifle. While she knew not to touch t 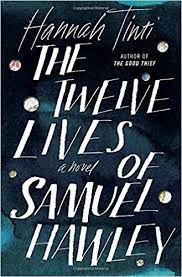 hem, guns were part of the backdrop of her life, hidden all over the house and cleaned nightly at the kitchen table. Her father never left the house without one, and he was always “listening for something else … always watching. Always waiting.” So it probably shouldn’t surprise the reader to learn that those twelve lives referred to in the title parallel twelve bullet scars that Samuel carries.

For as long as she can remember, Loo (short for Louise) and her father have rarely stayed in one place longer than a few months. They’ve crisscrossed the country in his truck, settling down in hotels long enough for her to attend school, often picking up and moving on before the year is over. They live on ramen noodles and take-out Chinese, play card games at night. At each stop Loo unpacks her few belongings while Samuel sets up a shrine in the bathroom to her dead mother’s memory: a bottle of shampoo and conditioner on the edge of the bathtub; a lipstick and compact; a parking ticket, shopping list, and scribbled notes propped on the mirror. The “dead woman” we learn, “was an ever-present part of their lives.”

Samuel and Loo finally come to settle in Olympus, Massachusetts, her mother Lily’s hometown. A house in the woods, ocean fishing, grandmother nearby–it sounds almost idyllic after twelve years of gypsy living. But that grandmother won’t acknowledge Loo, and the girl is often in trouble at school. Samuel is shunned by the small town and at odds with more established fishermen. Alternating chapters between Loo’s present and Samuel’s past, writer Hannah Tinti uses the bullet scars to tell Samuel’s back-story. And it’s not a pretty one.

Since he was barely sixteen, Samuel has made his way in the world by stealing and killing. The loving father and grieving widower is a criminal on the run. (I tried to figure out a way to slant that fact–some way to tell the truth a little more gently–but there it is.) Samuel Hawley has delivered stolen goods and been a hit man. He’s a runner for mob types and has good reason for all those guns. It seems that criminals keep score.

Now I’ve never shot a gun, and I can hardly think of a situation in which I’d shoot one. I don’t like violent movies–even those that get critical acclaim. I’m a law-abiding school teacher. (How’s that for status quo?!) But I was riveted by The Twelve Lives of Samuel Hawley. Tinti created a character I loved, whose actions I despised … but maybe came to understand.

And as luck would have it, yesterday’s Weekend Edition on NPR featured an interview with the author that might also pique your bookish interest. Published this week, The Twelve Lives of Samuel Hawley is an engaging read.