How do you measure happiness? By the number of friends you have? Or the prestige of your job? Maybe you’re happy if others think highly of you or praise you. Maybe happiness is related to the neighborhood you can afford or the make and model of your car. Smart people are happy, of course. Or are they? 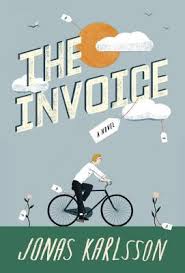 The new novel The Invoice by Jonas Karlsson explores just what makes a person happy. When we first meet him, the narrator’s life seems slightly shabby. Something of a film buff, he works part-time at a video store. His apartment is small and he is content with a few computer games, an occasional beer, and raspberry ice cream on a hot summer’s day. We know of one friend, Roger, and his parents are dead. He’s been single since the great love of his life Sunita returned to India and an arranged marriage. Definitely an underachiever by my standards–maybe even by most accounts.

But then he receives the invoice, charging him for everything. “Being alive costs,” he’s told. His bill: 5,700, 000 kronor … or approximately $662,000. He’s ignored previous notices in his mail, assuming they were junk mail. He doesn’t watch or read the news, so he’s missed out on months of public service announcements.

Now it’s time to pay up. External Happiness score (or E.H.) is “calculated according to a formula that takes account of age, place of residence, particular experiences, success, proximity to the sea … quality of home and relationships.” It’s all very objective.

When he calls the helpline to correct what he assumes is a mistake, he connects with Maud, and she arranges for an inventory of his flat since he hasn’t the money to pay. Eventually, he gets an appointment with someone who can review his account–he’s hoping to prove he’s had some setbacks and get a discount of sorts. So he lists his parent’s deaths. His breakup with Sunita. His adjusted invoice? 10,480,000 kronor.

And this is where the novel got interesting for me. Here’s how the auditors see his account:

… high E.H. points since the age of twelve, no empathy inhibitors. Parents both deceased. No family of his own, but regular experience quotient from comparable relationships. No setbacks noted since last December. Zero poverty rating. Top score on the emotional quotient. A number of good friendships over the years … Also an uncle–full marks as a role model. THe child’s response regarding the subject is fully emotional. Reliable … strong emotional attachments without any pressure to achieve … whiteness premium, male premium … Nothing but character forming setbacks. All according to the progression framework. There’s no deviation from the development model. He’s almost a textbook example of the Live for today template … almost absurd levels of pleasure … And full access to his feelings.

It was that sentence “Nothing but character forming setbacks” that struck me. When relationships are distant or damaged, when finances run amok, or work no longer satisfies, we might choose to embrace our good fortune instead of complain.

Sadly, I think something was lost in translation because for a book centered around such an engaging (and original!) idea, the writing felt flat. Even the main character (who, by the way, is never named in Any Man fashion) seemed colorless, despite his predicament. It’s a farce of a novel with an extraordinary premise, though, and just might be worth your time.

Especially if you find yourself questioning happiness.