After three driving days and 18 hours in the car, I was toast. I haven’t traveled alone in, like, ever. No college road trips because I was married and having babies. No divorcee road trips because I was scraping together a living and raising three kids. So this was a new adventure. But I have to admit–I liked it! Tiring as it was after five hours in the car. Frustrating as it was when I got ‘turned around’. (Notice how I got in touch with my testosterone there and didn’t say I got lost?!) I was large and in charge of when I ate and where I slept. I stopped when I wanted to and began the day at my leisure. No television. I blogged. I read.

I did come pretty close to muscling my way home in one day because I was so over the driving. But I knew I didn’t want to drive 11 straight hours. Over the trip I spent a lot of time talking myself through situations (“Just pull into the lot and look at the map.” “Take the next exit and get off 90–as long as you go west, you’ll get there.” That kind of thing.) So me-myself-and-I talked me down and decided that there was no way I should drive over 1600 miles without taking a couple side trips on the way home.

Stop #1 was Sioux Falls, South Dakota where I’d read about a gorgeous park right in the middle of the city. And beautiful it was. Falls Park sits along the Big Sioux river, the banks of which are Sioux quartzite, which, according to a handy green historical

marker, is “silica-cemented quartz sandstone” which was formed by “wave action on the floor of a of an ancient continental sea” a billion years ago. The Big Sioux descends in a series of waterfalls which have in the past been harnessed: the ruins of a 19th century mill still stand, as well as a Sioux Falls Light and Power building that once housed a generator.

But most surprising was the fact that visitors walked along the banks and out onto the rocks to the edge of the falls! I was hesitant at first, but when in Rome … The park was a beautiful place to stop and take a short hike to stretch my legs before I was on my way again.

[Funny side story: I’m following Google maps, skirting through a 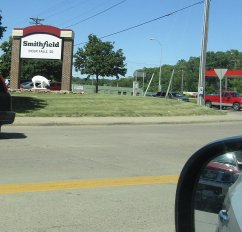 slightly industrial area when I caught a distinct whiff of pork. Like smokey, spicy, roasting or grilled meat. I thought maybe I was channeling my husband who is fanatic about any meat product smoked and salted. Me talking again: “You can’t just imagine pork–maybe there’s a BBQ restaurant smoking meat nearby.” And then I saw the parking lot sign: Smithfield. Those workers must be perpetually hungry working in such deliciously hazardous conditions!]

Stop #2 was Austin, Minnesota, where my handy dandy Roadtrippers app told me I could find the new SPAM museum. Now I know foodies turn their nose up at the stuff (heck, nearly everyone I know finds SPAM revolting) but I grew up eating it. Maybe it’s an acquired taste–but I like it. My only reservation was that B (he of the smoked pork cravings) wasn’t with me to share the joy and I felt a little disloyal going without him. But only a little. I knew I’d find some great souvenirs to bring him. And I did: a SPAM mug, a SPAM tee-shirt, and a few packaged SPAM samples. It’s difficult to describe a museum dedicated to a canned meat product, but link here to a short video clip I took that will give you a glimpse into this great SPAM emporium. And to top off my meat-o-ganza, I stopped across the street at Piggy Blues BBQ and dined on BBQ pork tacos.

And then, finally, this little piggy went all the way home … and  I’d do it all over again in a heartbeat.