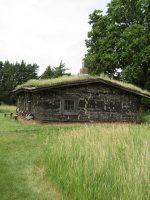 My goal was De Smet–850 long miles from home–where I’d visit Little Town on the Prairie, The Long Winter, and By the Shores of Silver Lake sites. But I sure couldn’t travel that far without a stop along the way to the banks of Plum Creek. The small town of Walnut Grove, namesake of the TV home of the Ingalls family, is just a few miles from Plum Creek, so I figured a stop at the Laura Ingalls Wilder Museum and Gift Store was in order. Except for the fact that TV actors visit Walnut Grove each year for the Wilder Pageant, Walnut Grove doesn’t offer much to LIW fans. Wilder herself only mentioned the town in passing; the family’s home in the area was at Plum Creek. This little town’s fame is totally reliant on the television show. 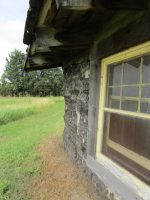 The emphasis is on ‘gift store’ at the Laura Ingalls Wilder Museum and Gift Store. This museum was similar to the one on my trip to the Little House in the Big Woods last summer–a lot of books, dolls, and souvenirs for sale, but not much actual Ingalls’ memorabilia. (But of course I did buy two books!) One room housed story boards floor to ceiling, illustrating the family’s journey with photos and explanation of the period, along with excerpts from Wilder’s books. There was a binder of photocopied articles Wilder wrote when she and Almanzo settled in Missouri. A buffalo coat like Pa wore. But other than that? Only a place setting of dishes, a sewing basket, and two balls of crochet thread actually belonged to Wilder. My favorite (and most authentically museum-worthy) display was a few original sketches and paintings by Garth Williams that became the illustrations fans of the books know and love so well.  The originals are surprisingly small–some only 3″ X 3″!

The other room in the museum itself was dedicated to the TV series–magazines, photos, autographs–but that really isn’t my connection with Laura Ingalls Wilder and I admit I barely looked at it. The museum site also has a few other exhibits representing the time period: a chapel, a “Grandma’s House” (which focused on all things housekeeping), and a school room.There was also a sod house on the museum grounds, but it couldn’t compare to the display of sod houses (or soddies as they’re lovingly referred to) on the McCone family

I actually visited the Sod House on the Prairie (which is a private venture) first since it was on the way into town. The family has built replicas of different styles of sod houses–a dug out, a sod house with plastered walls and wood floors, a rough soddie with dirt floors and hay roof–and furnished them accordingly. It is a labor of love–and the re-creations gave me an idea of what life would have been like in prairie homes. One word: dirt. Dirt everywhere. Even the display cards in each soddie were covered with gritty grime … and bird poop. So when you look at Garth Williams’ endearing renderings of Laura frolicking on the banks of Plum Creek with the cozy little sod house tucked into the hill like a Hobbit house, just remember: dirt.

Even though Plum Creek is just a creek (!) and the “remains” of the Ingalls’ dugout is only a depression in the bank, the site is surrounded by restored prairie that is home to birds and snakes and foxes (oh, my!) that makes a lovely little hike. (Bring bug spray!) In all honesty, I’d skip Walnut Grove and just drive through Plum Creek for a quick walk to stretch your legs and maybe a wade in the creek.

It was those times when I walked on Ingalls’ land and listened to the tall grass rustle, maybe catching sight of a thrush on the wing, that I felt Laura’s legacy. And that’s what I came for.