Today is day 6 of the Blogging from A to Z Challenge.  The challenge began with A on April 1 and continues the alphabet throughout the

month, except on Sundays. My theme for the month will be this blog’s tagline: life, books, and all things bookish, so you can expect a little bit of this ‘n that. I’m still reading, though, and I’ll add reviews whenever possible. Thirty days of blogging is a huge commitment for me, but I’m looking forward to meeting and greeting new blog friends.

What I read
Little Naomi’s plain life sometimes chaffed a little, like a wet mitten cuff on a cold wrist. She wonders aloud to her papa why, for instance, her

family has no car like the English, or why their hens and henhouse had to be so plain. Ever-patient Papa always replies that it’s just not their way. Even little sister Ruth scolded Naomi when she confided that just once she wanted “something fancy”.

Then the girls find a strange looking egg abandoned in the field. Knowing that an egg needed a mama, Naomi slips the it under one of her own plain chickens, Henny, and is amazed at the little chick who emerges. Compared to the other chicks, this big guy is obviously very different. Naomi keeps what turns out to be the peacock chick a secret as long as she can–until Fancy escapes and wows everyone with a beautiful display of the fancy God gave him. If only everyone would live out the unique fancy God planted in each one of us.

In typical Patricia Polacco fashion, this story teaches oh-so-much about being human without a trace of preachiness.

What I lived
This week I toured Amish country in Shipshewana, Indiana. The area has the third largest Amish population in the country after Ohio and Pennsylvania. The highlight of the trip for me was a stop at an Amish school where the teacher spoke with us after the children had left for 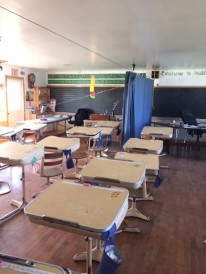 the day. Because most Amish no longer farm, the Amish community is growing in northern Indiana; our tour guide said that at the current rate, it’s expected that their population will double every 20 years.

It’s probably no surprise that I was fascinated by the school since I’ve spent nearly twenty-three years as a teacher in the public schools. The teacher, a young man of thirty, had been teaching for seven years. He had no training–in fact, he had the same 8th grade education as his oldest pupils. He said he read and studied after he was asked by the school board to serve.

The school has fifty-eight students in one room; a curtain down the middle of the room puts four grades on each side. The children learn arithmetic, history, vocabulary and phonics, English, and German. The room was spartan by our English standards: desks were circa 1970s and very well-loved; overhead propane lights burned gas lamp mantles; the coat room floor was poured concrete, the schoolroom floors wooden.

Despite the lack of modern conveniences, though, by grades 6-8, most of the students in this school scored above grade level (often by 2-3 grades) based on the yearly Iowa Skills test they take. The report card average for this teacher’s students was 94%. There were no discipline problems–and if any should arise, he said they would be taken care of at the monthly PTA meeting. Both parents attended; participation was … 100%.

Community is more important than the individual in Amish way of life. Maybe that’s what we’re missing.