I’m one of those wackos who, on July 29, 1981, got up at 4:00 AM to catch the first network coverage of the wedding of Lady Diana Spencer to Charles, Prince of Wales. (I believe the winner was NBC which started coverage a half hour earlier than the other networks.) I stayed glued to the television well into the afternoon when the last carriage rolled into the sunset and I did the same for her son’s wedding thirty years later.

And it would not be an exaggeration to say that when rumors began to circulate about Charles and Diana’s “troubles” and the Queen’s reaction to their divorce, my blood began to simmer. Then, again, Elizabeth 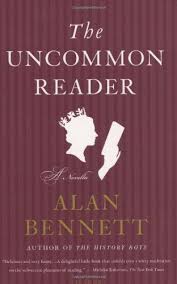 didn’t win many friends with her chilly demeanor in the days that followed Diana’s death, either, did she? We shirttail cousins and former colonists here in the U.S. probably don’t have a solid understanding of the Royals, but their lives do make for a sort of fairy tale gossip.

So is it any wonder I’ve loved two books that give us a more tender (and fictional, mind you) glimpse into the life of that stiff-upper-lipped Royal granny.  Alan Bennett gives us Queen Elizabeth, Reader Gone Wild. Seems that the Queen chases one of her beloved corgis out a back entrance of Windsor Castle and follows them to a bookmobile parked outs 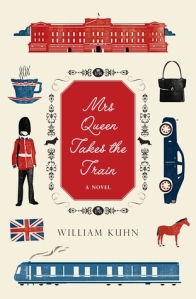 ide. A quick peek inside and a brief encounter with Windsor kitchen worker Norman compels Elizabeth to borrow a book out of politeness. And there begins her journey.

Reading has always been a way to embellish her role as queen—history, political treatise, classics only. But now Elizabeth reads out of curiosity. She reads the same books commoners do: Anita Brookner, Alice Munro, Sylvia Plath. Her conversation at official functions is no longer just small talk; she feels restricted by her office. Elizabeth awakens.

Mrs. Queen Takes the Train by William Kuhn is in the same vein, but with, perhaps, an even more tender view of the monarch. Elizabeth is having difficulty with her email—her IT man has tried to enlighten her to the wonders of “Miss Twitter” and “Mr. Google”, as she calls them, but her frustration is mounting. Add to that an unexplainable case of the blues that not even her usual yoga (!) or a visit to the Mews can shake off and the Queen pops out for a walk … which rather quickly turns into an unaccompanied train ride north to Edinburgh to visit the Britannia one last time.

Kuhn gives us a wider cast of characters than Bennett—a lady-in-waiting, her dresser, the stable girl, a young Muslim cheesemonger, an equerry, the senior butler—and their interactions with Elizabeth soften our view of her, as does Elizabeth’s own introspection and reverie. Will her staff catch up to Elizabeth before anything untoward happens to her? Will anyone prey upon this unassuming (but surprisingly assertive) elderly woman? Which of the staff’s love stories will have a happily ever after ending?

If you’d like a more private (and sometimes humorous) view of the Royals, both should be on your TBR stack. Long live the Queen.