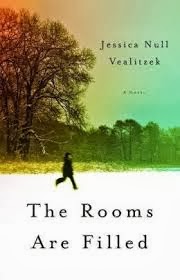 Michael Nygaard must leave the only home he’s ever known, an iconic Minnesota farm with a milk cow and chicken house, a white farmhouse surrounded by pines and oaks, a long gravel driveway. Michael and his dad shared early morning walks in the woods, watching and tracking local wolf packs, sometimes even disarming traps other farmers had set for the creatures. But after his father’s sudden death, all that is over and Michael and his mother Anne must move to Illinois where she can find work in her brother’s bar.

Rose and Julia have been inseparable since kindergarten. Wherever there was one, there was the other–“Kindred spirits are always kindred spirits. It can’t be helped,” said Rose. Even after college the girls were

roommates, and then they were more. Julia accepts a job as a teacher; Rose, a journalist, and together life’s possibilities seem limitless. But after an uncomfortable lunch date with Rose and  one of her student’s family, Julia yearns for freedom and anonymity, no longer certain whether she can live with a love not-yet-accepted. And so she leaves.

Their lives merge in small town Ackerman, Illinois. Michael’s mother struggles with her job as a waitress, while Michael adjusts to after school snacks at the bar instead of the kitchen table, sidewalks instead of wide-open fields, and their small, cramped house instead of the light-filled, breezy farmhouse. Julia breathes a little more freely in her apartment over the lunch counter; she starts a job teaching and Michael is her student. But like knows like and  Julia recognizes in Michael another fragile soul who just doesn’t fit. Even as she tries to protect him from school bullies, she faces a bully of her own.

The Rooms Are Filled is a tender story and there is much about this novel I liked. Writer Jessica Vealitzek captures the beauty of small moments well and some of her description was crystalline. Parts of the plot (especially the story of Rose and Julia) felt uneven. Since the novel was set in the early 1980s, their story was inevitably more closed because of attitudes at the time. But I couldn’t help but think the story would have been richer if she had explored that relationship more fully.