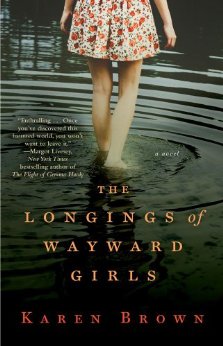 Karen Brown’s Longings of Wayward Girls is one of the only chick lit titles I’ve read this summer … and it’s a great one! Brown tells the story of Sadie at twelve and Sadie years later as wife and mother. Because what happened to Sadie then was haunting the Sadie now.

Sadie then was a bright, imaginative, and pretty girl–the ringleader of the neighborhood children in her hometown of Wintonbury. She writes the Christmas chorale, organizes the annual Haunted Woods, and plays endless hours of Old-Fashioned House. Her best friend Betty ever at her side,

Sadie’s life in suburban Connecticut in the seventies is idyllic. Except for her pill-popping, alcoholic mom and the teenage boy she seduces. And the girl, Laura Loomis, who disappears one day, never to be found. Or the neighborhood outcast who, Sadie learns, is abused by her father. How about the unfathomable torment one girl can inflict upon another?

Sadie now is a pulled-together, fashionable stay-at-home-mom who still lives in Wintonbury (albeit in a newer upscale neighborhood) and whose life continues that idyll. Except for her grief over the still born daughter she mourns. Or her ineffectual paperdoll of a husband. And the suffocating boredom she feels. Enter Ray Filley, a crush from her tween-hood, back in town after his father’s death–single, handsome, infatuated with Sadie, and dangerous. It’s when Sadie takes up with Ray that her then and now collide in a harrowing way. I must admit that at times I thought I’d mistakenly picked up a suspense novel and I read the end of the novel flipping pages as quickly as I could.

Karen Brown has a keen eye for the inner world of women–our boredom and frustration, the endless demands and stalled careers–and the tolls we pay to live out the life of June Cleaver. I can’t think of a better book to discuss in Book Club. It would be one long night.

One thought on “Then and now”