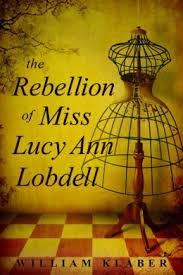 Lucy Ann was on the run. Her abusive husband had left her, she had no way to support her toddler daughter, and she was living once again with her disapproving family. Her options were few. So Lucy Ann Slater, always more comfortable outside than in, a better shot than a seamstress, became Joseph Lobdell–and wearing short hair and her brother’s clothes, her mannerisms studied, she passed. Initially, I thought Lucy’s story would be closer to Viola’s in Shakespeare’s Twelfth Night. In the end, Lucy’s story as Joe set me thinking about gender and culture, what’s learned and what’s innate.

On his travels, Joe lives in one small town after another. He teaches dance and violin at his first stop; squats in the wilds of Minnesota to hold a landowner’s property through winter; settles to raise horses; works odd jobs on a poor farm; even preaches for a time. At every stop Joe makes friends who know nothing of his secret. He falls in love for the first time. And author William Klaber would have us understand that it was his falling in love with (and engagment to) the wild and passionate Lydia Watson that brought Joe to see himself as more man than woman. Joe’s struggles were real–he had no gauge by which to measure what he felt and my heart ached for him.

But at each of those stops Joe was eventually discovered and threatened with violence, arrested, chased out of town, assaulted. Most of society had only one measure for his cross-dressing: it was an “offense against moral decency … contrary to the laws of God, man and nature.”    And so Joe never knew peace for any length of time.

At times, author William Klaber lost hold of Joe’s narrative, choosing, I think, to cover more territory than was necessary to tell his story. Historically, there are many gaps to Lucy’s story; Klaber attempted to fill them when perhaps he should not have.

I was surprised in reading the author’s acknowledgements, that Lucy Lobdell was real, known as the female hunter of Delaware County. A distant relative of Lucy’s, Dr. Bambi Lobdell, maintains in another book about her life, A Strange Sort of Being, that Lucy was transgender. (It’s now on my wishlist.) But after reading a post on The Advocate.com, it’s clear that despite coming a long way in our thinking about gender identity, we’re still stuck, as this discussion on GenderTrender indicates. I even found myself disappointed that The Rebellion of Miss Lucy Ann Lobdell was written by a man and worried he had co-opted her story to fit his own agenda–why had he mentioned Bambi Lobdell only once in his afterward?

“Oh what a tangled web we weave” for ourselves and others who would simply love.

One thought on “A tangled web”