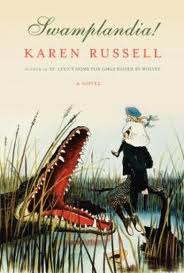 This book sat tucked away for several months– a reader’s copy, passed on by a lucky friend who attends the Michigan Booksellers Association every year– until it finally wormed its way off my bookshelf when I heard NPR’s own Nancy Corrigan add it to her “10 Best Novels of 2011” list.  Now the synopsis had always sounded a bit John Irving-esque, which was its appeal. Always up for quirky characters in impossible situations, how could I pass up a novel about a family of alligator wrestlers who run an alligator themed park?

And, to be sure, I wasn’t disappointed for the first several chapters. Ava Bigtree has potential has the next star in Swapmlandia! She loves to perform and is quick and agile–qualities essential in gator wrestling. But Ava’s young mother has died, her father and brother disappear, and Ava is left alone on the family’s Everglade island with a sixteen-year-old-sister in love with Ouiji boards and possibly having an affair with a ghost. That all fits the Irving bill. Add to the plot that brother Kiwi is found working at Swamplandia!s rival World of Darkness park and the Chief at a casino and the novel seems on it’s way to another Hotel New Hampshire.

[spoiler alert]
But Russell’s characters don’t have the innate goodness of Irving’s, nor do they seem indomitable, and the novel takes a dark turn into a child’s rape and abduction. And while many contemporary novels deal with life’s dark realities, Russell never brought her characters back into the light–and I feared for the future of Ava and her siblings, even though the writer seems to want to convince us that the story has a happy ending.

Next up: 11/22/63 by Stephen King, our next book club read for March. I am delighted after only 75 pages and I am looking for my own portal into the past.

One thought on “Dark and stormy”