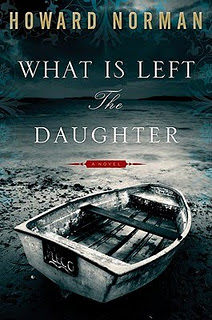 What Is Left the Daughter
Howard Norman

I chose this book, plain and simple, for the title. I have a kind of fascination with daughters, being one and all. And so it was with some disappointment that I realized the novel was really a father’s letter to his daughter, a daughter he had never lived with and hadn’t seen for twenty-some years. Now Wyatt’s story is compelling–I was just expecting a female protagonist. Set in Nova Scotia, I loved the bleak sky, grey sea, and heavy salt air that clung to every event and seeped into each character.

Wyatt Hillyer is orphaned at 16 when both his parents commit suicide, jumping to their deaths from bridges separated by only a few miles. Both, it seems, loved the same woman. (Now that got my attention!) Wyatt accepts an offer from his aunt and uncle to move to small town Middle Economy and become apprenticed in Uncle Donald’s tobaggon shop. Wyatt immediately falls in love with his (adopted) cousin Tilda in true unrequited love fashion. Tilda, intent on becomming a professional mourner, is preoccupied and hardly notices Wyatt. Tilda eventually marries Hans Mohring, a student from Germany, just as Canada poises on high alert at World War II’s advent.

Uncle Donald becomes obsessive about possible U-boat attack in Canadian waters–so much so that he and Aunt Constance separate, Uncle Donald moving into his workshop. Tragedy does finally strikes in the Northumberland Strait and sets the plot unraveling. Both Wyatt and Donald spend time in prison, baby Marlais (she of the “daughter” in the title) is born, and Wyatt finds himself seperated from Tilda by an ocean.

I must admit, though, that I struggled for over one hundred pages to keep reading the book–not because of any plot or character weakness, but because of the writer’s voice. The characters speech was quaint, overly formal, or maybe just Novia Scotian. It was off-putting. But I was so drawn to Wyatt and the setting that I let go the fight. And glad I am that I did.

Next up: Swamplandia! by  Karen Russell–so far, a bit John Updike-ish, which is not a bad thing!