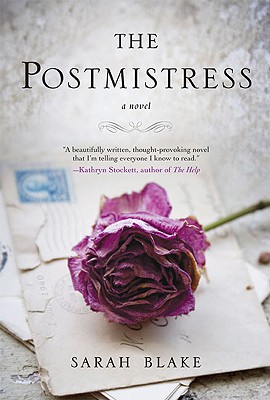 The Postmistress
by Sarah Blake

Nineteen-forty, small Massachusetts village, the London blitz, a single Postmistress … it all had the sound of  the charming Guernsey Literary and Potato Peel Pie Society. And like many who didn’t experience the war, I’ve encountered World War II through my dreamy Tales of South Pacific and Norman Rockwell goggles. Granted, the past several years have given us movies like Saving Private Ryan–but for those of us with tender sensibilities, Michener was more comfortable. But no fairy tale here–author Sarah Blake presented the Second World War as the ambiguous moral battle it surely was for some Americans.

Told through the eyes of three women, the reader comes to see that all America probably wasn’t as unabashedly patriotic as old newsreels would have us believe. Iris James is forty, single, a bit standoffish, and runs the Franklin post office with friendly efficiency; Emma Trask wants to keep her little light of family happiness hidden under a bushel; and Frankie Bard, girl reporter, works right alongside the great Edward R. Murrow. Each watches the war unfold with ambivalence. It is the men in their lives who die as a result of war–a situation that would make anyone face life with uncertainty. While I thought that Blake probably made these characters a bit too forward thinking, they were, overall, believable. (As is always my complaint, I grew quite weary of Emma’s whining and Frankie’s inability to make up her mind–but that’s probably just me.) I did think the undelivered letter motif was a bit overwrought and didn’t quite deserve attention it got on the book’s blurb. I was also more than a bit disappointed that Blake titled the book The Postmistress when Iris herself corrected those who did, and told them her title was simply “postmaster”.

Perhaps the most serendipitous  discovery came not from the book itself, but from the bookmark I used. With about fifty pages of reading left, I idly turned over the vintage linen postcard cum bookmark I had stuck between the pages and even more casually began to read the message written on the back. (I’ve spent several months collecting Michigan postcards from the 30’s and 40’s to use as a border above the wainscoting in my kitchen.) Imagine my surprise when I read the following, dated 1946. written in back-slanted precise script: “My husband and brother both arrived from overseas in time for Christmas [sic] as you can imagine the happy holidays. My brother went back to college.” Surely a reference to returning vets–two soldiers returned home, safe at last.