The Weed That Strings the Hangman’s Bag
by Alan Bradley

It took me a more pages than I was comfortable with to admit I liked Alan Bradley’s first Flavia DeLuce novel, Sweetness at the Bottom of the Pie. I am not a murder-mystery fan, so that may have been part of it. Or maybe what kept me snagged were the incredibly precise chemistry references far beyond my knowledge–but I am a closet Anglophile, a former eleven-year-old girl, and someone who often lives in a melodramatic story-world myself … so what was not to like?  I read Weed That Strings the Hangman’s Bag with no such reservations and enjoyed every word of it, chemistry or not.

When we catch up with Buckshaw’s residents, Flavia is still mired in constant warfare with her older sisters Daffy and Feely, and Father still hides behind his stamps. Dogger and Mrs. Mullet still hold the seams of the family together, shell-shock and horrid food notwithstanding. And Flavia’s beloved bicycle Gladys still transports her all over Bishop’s Lacey and its environs–and it is Gladys herself who brings Flavia to St. Tancred’s churchyard where she meets Rupert Porson, famed puppeteer of the BBC’s Magic Kingdom television program. In order to pay for repairs to his broken-down caravan, Rupert and his lovely assistant Nialla agree to put on a puppet show in the parish hall.

Enter a mad hermitess, a grief-crazed mother, an unmarried pregnant Mother Goose, a former German POW, and a marijuana (that of the “weed” in the title) growing farmer and you’ve got a Flavia DeLuce novel of the best sort. 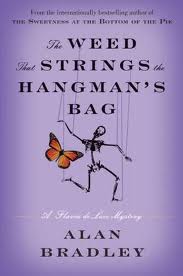 The impromptu puppet show ends with a murder, and Flavia sets out (of course) to unravel the mystery. Along the way she uncovers a love affair, reconstructs the truth behind an accidental death, and rescues a suicide with an antidote of (what else?) dove guano! Then, step-by-step Flavia  unfolds her discoveries to her idol Inspector Hewitt. How can one not love this little girl?.

Maybe it was just that I was familiar with the pace of Bradley’s stories and the rhythm of his writing, but this mystery was a more enjoyable read. Or perhaps it was just because I was happy to enter again this quaint and familiar world. After Sweetness I wasn’t certain I’d read Bradley’s second novel; After Weed, I’m anxious for his third.

One thought on “Flavia fever”