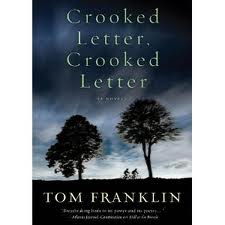 Post-Christmas open house found me sluggish, lounging on the sofa in my pj’s until 4 PM–and devouring Tom Franklin’s Crooked Letter, Crooked Letter in a mere ten hours. Set in Mississippi in the early seventies and the present, the novel explores the lives of two men, one black, one white, following the murder of a teenage girl in their town. Larry Ott, for years convicted of the crime in the court of public opinion (although no body was ever found, nor did he ever confess), is the town loner, and his (sometimes) black friend Silas Jones returns to his hometown as town constable after serving several years on the police force in Oxford, Mississippi. Their lives connect again when another young woman comes up missing–and Larry Ott is once again the prime suspect. 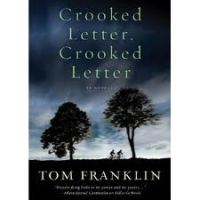 Franklin wove his narrative in such a way that I was never slowed by the back story he needed to tell. The novel, suprisingly, begins with Larry’s murder-gone-wrong. Silas finds himself drawn back to Larry’s home to gain perspective on their broken childhood friendship. As happens in most Southern novels, Silas discovers a secret in the attic–literally–and tries to come to terms with its implications for the rest of the novel. Silas also has harbored some information for thirty years that would have implicated himself, rather than Larry, in the past murder.

The book’s back cover blurb called the book a “thriller” and suspense novel, which was much too heavy-handed in my view. At novel’s end, we see both men close one door and open another. Silas comes to understand the redemptive power of truth, and Larry begins to learn the strength found in community–but both somewhat grudgingly, and only after suffering in isolation for much too long.